Bison Transport is in the midst of a trial project using battery electric Freightliner tractors — two of only 40 of these custom-built Freightliners currently on the road in North America — as part of the inevitable transition to the electrification of the trucking industry.

But while Bison, Freightliner officials and others say there is a lot of excitement about the process, there is also an awful lot of work ahead before the diesel fuel burning industry is able to fully transition.

Winnipeg-based Bison, one of the largest trucking companies in the country — that was acquired by James Richardson & Sons Ltd. early this year — has invested lots of time and energy to become an industry leader in reducing the amount of greenhouse gas (GHG) they emit into the atmosphere.

Mike Gomes, Bison’s vice-president of maintenance, said, "There is an appetite right across the board. Bison is committed to understanding the emerging technologies and participating in live tests."

In addition to testing Freightliner’s battery electric pre-production model (full production of the vehicles is scheduled to begin in October 2022), it is also involved in a project with hydrogen-electric vehicles in Alberta.

But not only does the industry have to worry about the hauling capacity — the Freightliner model will carry 80,000 pounds of freight which is the industry norm — but a charging infrastructure also needs to be created and the economics of the whole supply chain needs to be addressed because battery electric tractors will sell for about twice as much as diesel ones.

Alexander Voets, eMobility product and sales strategy manager at Daimler Trucks North America, the owner of Freightliner, said there is a lot of excitement about electrification in the industry and there is an expectation that it will be predominant in a couple of decades.

Voets said climate change is the prime macro driver for the transition, which is becoming a focus for corporate responsibility initiatives. And he said the expectation that the total cost of ownership and the future of electricity as cheaper road fuel compared to diesel will also start to become a factor.

But unlike the consumer decision-making process to buy an electric vehicle, there are competitive and industry-wide considerations when it comes to the electrification of the trucking fleet.

For a trucking company to jump on to a new technology that has different performance capacity, like shorter range and maybe the ability to hold less freight… the economies of the entire industry need to be adjusted. And the economics is not dependant on the individual corporate budget. It is dependant on the expectations of the entire supply chain.

He said that is what is making the transition so hard but agreed there is huge interest from the industry.

When it comes to government support, that is a different story.

Last year, the Manitoba and federal governments came up with a $12 million annual support through the Efficient Trucking Program that allows trucking companies to apply for rebates around efficiency technologies.

But the unfortunate part of that program is that it does not support anything other than diesel technology. Electric truck technologies do not qualify for support.

Shaw said the MTA has been lobbying the province for many years to come up with a collaborative approach on an electrification strategy.

Among other benefits, there could be a huge uptake in electricity demand, something that would benefit the bottom line of the provincially-owned hydro utility in Manitoba.

The Bison "customer experience" trial of the electric Freightliner is on a route between Delta, B.C., and Washington state.

While Gomes said there were several factors involved in doing it on the west coast, including the fact that the current run is associated with one specific customer, Shaw said it’s too bad the province and Manitoba Hydro could not have made it more attractive to do the test in Manitoba.

We’re very proud of Bison," said Shaw. "It is an industry leader, Manitoba’s largest trucking company owned by one of the largest companies in the province… but they had to go to B.C.

Currently, the 60,000 diesel trucks licensed in Manitoba pay out about $120 million per year in carbon tax.

Shaw said, "We should be able to come up with a strategy to transition to electric with that kind of budget." 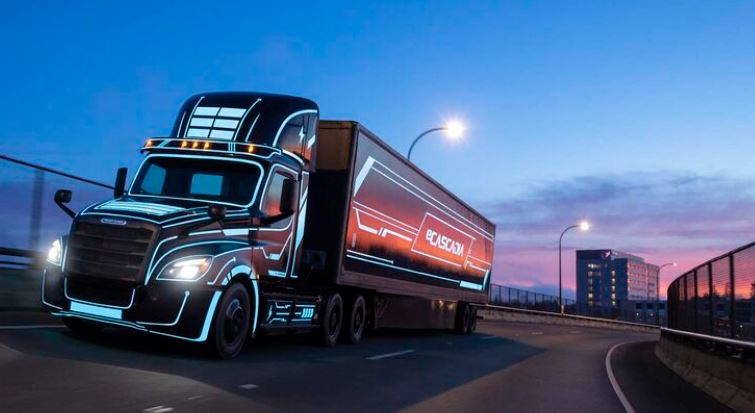