In the midst of a global supply chain mess and with carbon emission restrictions becoming a near-term imperative, the Manitoba trucking industry is looking for more help and better planning from government to engage in the costly transition away from fossil fuels.

In that context, Winnipeg-based Gardewine, a subsidiary of Calgary-based Mullen Group, is trying to do what it can.

The company has long dominated the northern Manitoba and Northern Ontario hauling market and just took receipt of the province’s first battery-electric shunt truck, a low-gear heavy duty tractor that moves trailers around a trucking yard.

Along with a number of electric Ford courier vans on order, the company is trying to set an example.

We felt it was imperative. Someone needs to go out and lead this charge," said Gardewine president Darin Downey. "Our view on this is that industry needs to lead and government needs to support.

Downey was thankful to receive provincial government support of $150,000 from the province’s $1-million Conservation and Climate Fund for the $250,000 vehicle.

But industry officials do not believe the time-sensitive fund — it has already been fully subscribed and there is no guarantee it will be included in next year’s budget — is a tool that industry players can count on to make their capital investment plans.

While provinces such as Alberta, B.C. and Quebec are spending millions on support for the transportation industry to transition, Manitoba’s support, while appreciated by the industry, is timid in comparison.

And while many in the industry understand the need for change, the commercial and competitive realities continue to make it a difficult investment.

Terry Shaw, the executive director of the Manitoba Trucking Association, said. "We all know the supply chain challenges we are living in right now. If a company went to its shippers and receivers and told them they are going to raise rates because they’re utilizing experimental technology they will say they are not OK with that."

Downey said the actual capital investment, even for something like a retrofitted shunt truck — and the charging infrastructure that is required — does not make economic sense right now,

The numbers are not feasible today," he said. "But it does not mean they won’t be in the future.

"We need our government partners to help offset the costs so we can figure out how and where these things work without negatively impacting the supply chain," said Shaw.

The trucking industry actually has support from some environmental activists on this matter.

Both Shaw and Curt Hull, the project director of Climate Change Connection, say there are economic opportunities they feel Manitoba is not fully embracing.

There are about 60,000 heavy diesel trucks licensed in Manitoba and the transportation industry is responsible for about 40 per cent of the province’s greenhouse gas emissions.

Shaw said, "If we can electrify two per cent or five per cent of them not only will that have a massive environmental impact higher than anything in the province’s Climate and Green Plan, but what would that mean to Hydro revenues?"

For some time now the Manitoba Trucking Association has been pleading with government to re-invest the carbon tax into incentives or subsidies to allow the industry to invest in new technologies.

The transition to electric will eventually become a new revenue stream for Manitoba Hydro, something that both Shaw and Hull believe is not being factored in to Manitoba Hydro’s own planning.

"What we are suggesting is to re-direct a good portion of the carbon tax to Efficiency Manitoba and change its mandate to promote the efficient use of electricity for replacing fossil fuels," Hull said.

Gardewine has committed to spending $1.1 million on electrification this year. In 2019, it replaced 14 propane-powered forklift trucks with electric ones.

"That saves 220 tonnes of CO2 per year from our carbon footprint," Downey said. "In the last the last 60 days Ford announced it was investing billions of dollars into its own battery manufacturing factories.

These prices will start to come down," he said. "We want to be on the cutting edge. 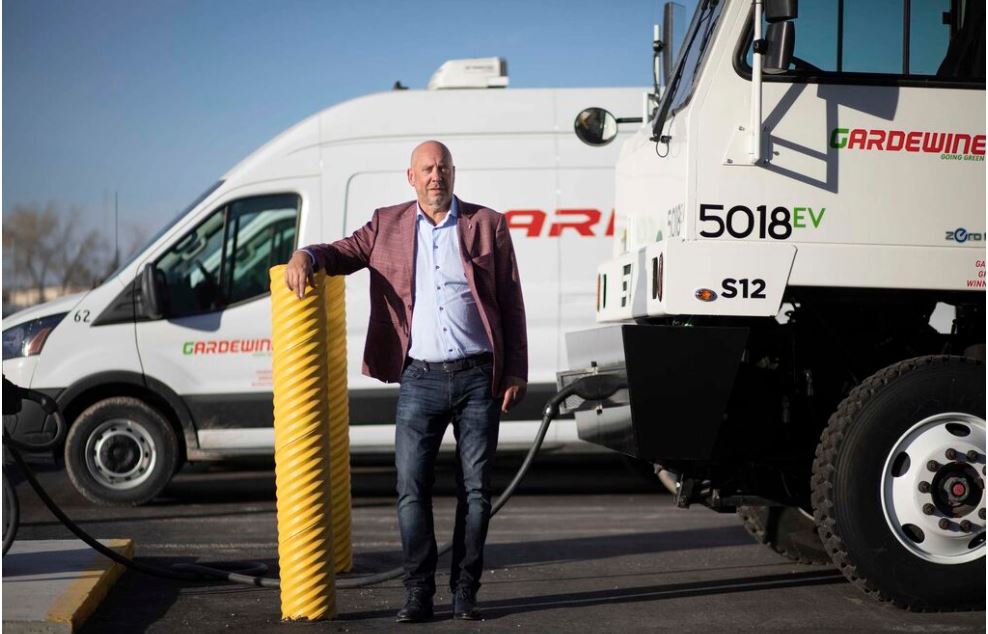