On the road to a low-cost, carbon-free Alberta

Criticism by environmentalists of Alberta's new Canadian Energy Centre might leave you thinking the province was stubbornly resisting fixing global climate change for the sake of their economy.

Instead, the province is home to world-leading innovations that in just over a year will see carbon-free transport trucks hauling freight on Highway 2, the busy corridor that connects Calgary, Canada's fossil fuel business capital, to the provincial political capital, Edmonton.

It's called AZETEC for the Alberta Zero-Emissions Truck Electrification Collaboration, and people behind the new scheme say that rather than shying away from climate change advocates like Greta Thunberg, currently visiting the province, Albertans have every reason to boast.

Not only will the trucks be carbon-free, they will be cheaper to run than existing diesel transports, and the fuel they use will be produced by the Canadian fossil fuel industry.

And while the new vehicles that hit the road in 2021 will be a pilot project, David Layzell, one of the leaders behind the scheme, says its economics make AZETEC a credible step toward the kind of low- and no-carbon world that climate scientists and activists insist is the only way to save the planet.

"Our focus has been on how do we produce gasoline and diesel without carbon emissions, but those are the fuels that the whole world is trying to stop using," says Layzell, director of the Canadian Energy Systems Analysis Research (CESAR) Initiative at the University of Calgary, describing the thinking that launched the project.

From the comment by Alberta Environment Minister Jason Nixon that Thunberg "doesn't understand" the province to the statement that "No one's ever asked me to declare a climate emergency," as Medicine Hat Mayor Ted Clugston told the Medicine Hat News, some Alberta politicians are clearly not on side with climate change activists.

Perhaps such comments are based on out-of-date thinking. That's not unreasonable, because the technology to make Layzell's plan cost effective has only recently begun to gel.

And rather than abruptly ending oil and gas production and switching to a brand new disruptive business model, this set of innovations that have all arrived about the same time could set the Canadian fossil fuel economy on a gradual transition to an economy that produces almost no carbon at all.

The Canadian industry has focused on reducing the carbon intensity of oil and gas production. Clearly those are steps in the right direction.

The main reason people like Thunberg and investors like the Norway pension fund have objected to bitumen production is the high carbon cost of extracting the stuff, which in traditional methods requires the burning of huge quantities of another fossil fuel, natural gas. But there is a second problem.

While cutting back on the amount of carbon dioxide produced in processing is constructive, fossil fuels generate another round of greenhouse gases during their ultimate combustion.

When end users burn the fossil fuel, whether oil, gasoline, diesel or natural gas and whether for transportation, electric power or heat, it generates between two and three kilograms of the greenhouse gas carbon dioxide per litre for the two liquid fuels we use in cars and trucks.

Part of the power of the AZETEC energy system is that it avoids that final step. Rather than burning fossil fuels directly, creating combustion pollutants such as nitrous oxides and particulates plus carbon dioxide, the AZETEC trucks will use carbon-free hydrogen fuel manufactured from natural gas.

Not just better but cheaper

But the magic that makes this plan work is that the cost of running a transport truck carbon-free is a fraction of the cost of the conventional alternative. Measured in units of energy, or gigajoules, the compelling business case is that the low-carbon substitute is significantly cheaper.

The wholesale cost of making diesel fuel is about $19 per gigajoule or 75 cents a litre," said Layzell. "The cost for us to make hydrogen is only about $10 or $11 a gigajoule. So we can actually make a zero-carbon fuel with very low carbon emissions — we'll put the carbon back in the ground — and we can do it at about half the price.

One of the innovations that makes this possible is the Alberta work done on carbon capture and storage, reliably and permanently injecting carbon dioxide into porous rock deep underground. Whereas the process has been difficult and costly when attempted on post-combustion CO2, as tried in Saskatchewan coal plants, trapping the concentrated carbon dioxide produced by the hydrogen-making process can be as cheap as $4 a gigajoule.

Not only is the cost per unit of energy lower, the fuel cells used to turn hydrogen into electricity to run the truck engines are up to twice as energy efficient due to the same technologies that make battery and hybrid cars cheap to run.

Despite the favourable economics, the AZETEC system has not proved itself yet. The trucks, which are engineered by Ballard Power Systems and Montreal-based Dana/Nordresa and operated by Alberta trucking companies Trimac and Bison Transport, must survive their 18-month experiment.

To make fuel distribution cost-efficient will require about 50 trucks operating on Highway 2, using about five tonnes of hydrogen a day.

But if carbon-free transportation can be shown to work in the heart of Canada's oil country, in a Canadian climate, it is a technology that could reasonably conquer the world.

Other sources of hydrogen, including from the oilsands and eventually from electrolysis when technology brings costs down, would allow the technology to spread from this highway to other roads and to other uses. 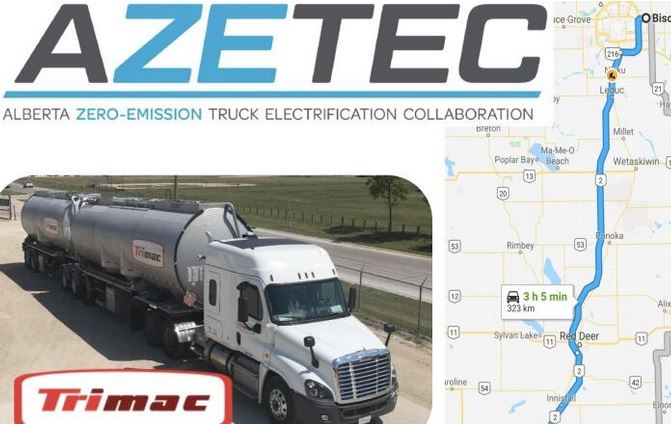