The province has granted Manitoba Hydro a licence to build an 80-kilometre transmission line that will help its boost power sales to Saskatchewan.

Construction of the Birtle Transmission Project is expected to begin this summer. The cost of the project, which has been in the works for several years, was pegged at $69 million in 2018.

The 230-kilovolt transmission line will run from a hydro station just south of Birtle to the Saskatchewan border at Tantallon, Sask.

In 2018, Hydro and SaskPower signed a deal that would result in up to 215 megawatts of renewable hydroelectricity flow from Manitoba to Saskatchewan beginning in 2022.

It would provide Saskatchewan, which still relies on coal-powered electricity, to meet the power needs for 82,000 homes.

"We do require one winter construction season to complete the project as the licence (from the Manitoba Department of Conservation and Climate) requires us to work on frozen-ground conditions," he said in an email.

All land easements have been secured for the project, Owen said.

When the power sale to Saskatchewan was announced, the deal was said to be for 18 years, with a potential extension to a total of 30 years.

An official with SaskPower said at the time, the deal would help the corporation meet its commitment to reducing its greenhouse gas emissions by 40 per cent (compared with 2005) by 2030.

Premier Brian Pallister has repeatedly argued Ottawa has not given Manitoba enough credit for hydroelectric power sales when it formulates its national climate change policies. Utilities in Minnesota and Wisconsin are important customers for Manitoba Hydro.

The new contract with SaskPower could bring total electricity sales to Manitoba's western neighbour to as much as 315 mw by 2022. Manitoba estimates the exports could lead to emissions reductions of about 1.3 megatonnes of carbon dioxide equivalent per year by displacing fossil-fuel power generation in Saskatchewan.

Meanwhile, the project licence requires Manitoba Hydro to submit an environmental protection plan prior to the start of construction.

The plan must identify measures to minimize impacts to "culturally and environmentally sensitive sites" along the route through the use of buffer zones, selective clearing, non-chemical vegetation management and other methods.

It must also include specific sites identified by Indigenous communities for such uses as hunting, trapping, plant harvesting, ceremonial practices.

The licence requires Hydro to provide a one-time $150,000 contribution, to be held by the Manitoba Habitat Heritage Corp., for the costs of establishing a grassland habitat recovery program within the Spy Hill-Ellice Community Pasture.

Manitoba Hydro is also required to provide cultural awareness training for staff working in construction areas within the development.

"The training shall include recognizing cultural sites and management of any resources encountered," according to the licence.

Hydro is also required to employ Métis and First Nation monitors to be present during construction within the Spy Hill-Ellice Community Pasture, "where there is potential for the discovery of historic resources."

In addition to allowing for increased sales, the new transmission line will also improve the reliability of the electrical grid between the two provinces, its proponents say. 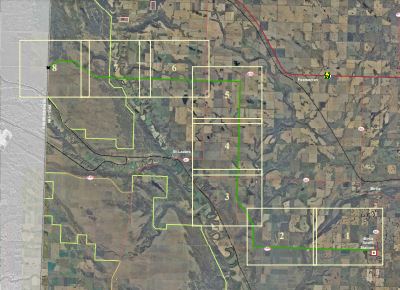