Financial, environmental impact of Keeyask and other dams on northern communities explored

Whether the Keeyask dam should have been built is the focus of this opportune study, which also details how meeting the needs of a business-oriented Crown corporation while respecting the cultural expectations of northern Manitoba’s Indigenous inhabitants is a delicate balancing act.

This most recent hydroelectric station built by Manitoba Hydro on the Nelson River began transmitting power in February 2021 along an equally controversial Bipole III transmission line, and follows a string of several earlier stations built in northern Manitoba, beginning with the Kelsey station in the 1950s.

The relatively cheap electrical energy that first supported the Thompson nickel mine — and now feeds an ever-growing, modern provincial economy — is frequently touted as a “green” alternative to fossil fuels, but even prior to Keeyask, earlier dams had changed the river’s flow patterns, affecting beaver and muskrat habitat, disrupting caribou migratory routes and flooding sets of rapids where sturgeon spawned, depriving northern residents of centuries-old fur and food sources.

Windfall profits from sales to other jurisdictions often justify the costs of hydroelectric development to a debt-laden provincial Crown corporation, but as this timely study affirms, problems arise in justifying the costs handed to certain people and their environment.

Co-editors Aimée Craft, an Indigenous lawyer from Winnipeg and associate professor at the faculty of law at the University of Ottawa, and Jill Blakley, an associate professor in the department of geography and planning at the University of Saskatchewan, reveal how the construction of dams has altered the five largest rivers in the province along with six of its 12 largest lakes, changing the future for several Indigenous communities.

Craft and Blakley are actively involved in issues pertaining to land and water usage. In this book they — along with an eclectic literary panel of academics, researchers and environmental advocates from Manitoba and other provinces, as well as Indigenous community members from several northern First Nations — show why true reconciliation with Indigenous people must acknowledge the effects of hydro development.

In Our Backyard is an aptly titled collection of heartfelt personal observations and rigorously researched, amply documented scholarly analyses that expose how massive dams have affected formerly pristine landscapes while generating the electricity used by southern Manitoba’s industries and its people.

Images of unconcerned urban-dwelling NIMBYs being cooled by humming air conditioners may cross readers’ minds when encountering the words of a northern community member, speaking in Cree at a public hearing held in Winnipeg in 2013 regarding the Keeyask project then being proposed: “You killed the land. You killed the water. You killed the fish. You killed the Indian.”

This comprehensive study encompasses the six-decades-long evolution of hydroelectric development in Manitoba, revealing the effects of dam construction on northern Manitoba’s river system and tracing the transition from authoritative pronouncements made by Manitoba Hydro to its present-day partnering with Indigenous communities regarding employment and profit-sharing opportunities.

Ending with suggestions for better “consultative processes” prior to future hydro projects, In Our Backyard offers appendices that further dispel the notion of hydroelectricity being a clean and green energy source.

They include a verbatim apology issued in 2015 by Manitoba’s then-premier, Greg Selinger, to the community of Pimicikamak (formerly Cross Lake First Nation), followed by Chief Cathy Merrick’s appreciation for the gesture, while reminding him, “Our lands, water, and resources are still a mess.”

Several panel contributors support the co-editors’ view that the Keeyask development “goes far beyond” the energy consumption needs of Manitobans, a sentiment echoed in another appendix citing an excerpt from an Economic Review of Bipole III and Keeyask conducted by former Saskatchewan premier Brad Wall and released in 2020.

Joseph Hnatiuk is a retired teacher who remembers just opening or closing windows to stay cool. 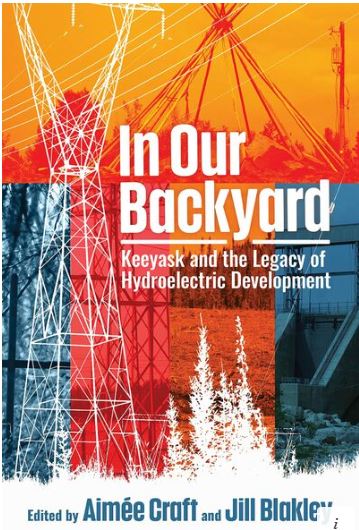